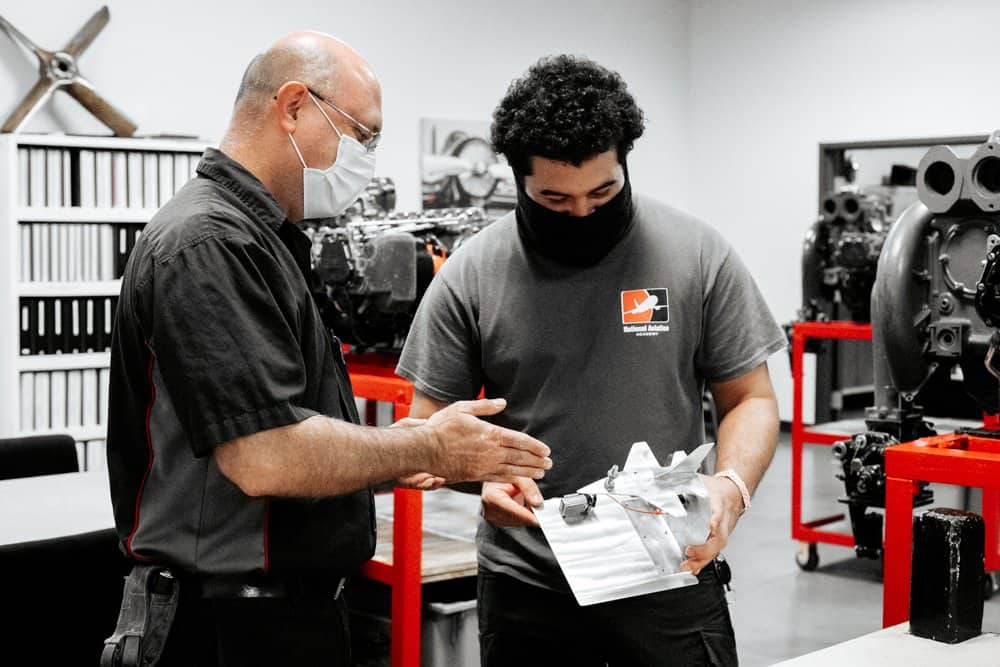 The Training Tool – An Essential Piece of Aviation Education

Training tools are essential in learning concepts and theories, especially in aviation maintenance. For example, one such training tool that was fixed and refurbished at National Aviation Academy recently was one that showcased three axes of flight: pitch (lateral), yaw (vertical), and roll (longitudinal).

This time, the project was initiated by Nelson Reithmaier, Term 2 Instructor at our campus in Clearwater, Florida. As a Veteran of the U.S. Coast Guard, Nelson was part of the aircrew maintenance team for helicopters. The training tool he imagined would allow students to actually see the importance of fastener vibration that occurs on aircraft, and how vibration can lead to parts becoming dislodged over time.

To start, Mr. Reithmaier originally designed and built his own wooden training tool showcasing vibration effects on an aircraft’s screws, but after some thought, he decided to turn to a student who has been training to work on sheet metal to make an aluminum version.

For this particular project, Nelson chose to enlist Harry P., a student in our Term 5 Airframe class, to work on the aluminum design and creation! 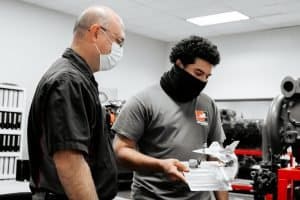 Nelson and Harry discuss the creation of the aviation training tool.

Harry agreed to work on the training tool as an extracurricular project since he had already been training with sheet metal! The tool would incorporate a small motor from Nelson’s initial project. In the end, the training tool will be used during Nelson’s classes, demonstrating how important torqued and fastened parts are in an aircraft.

Parts, such as screws, can become dislodged over time due to the vibration of the aircraft. Even the smallest parts can create catastrophic results if not safety-wired and torqued into place. It is an important lesson for each aircraft maintenance technician to learn, as the safety of the passengers on an aircraft is the most crucial part of their job.

In the beginning, Harry used a model for reference to shape the aircraft portion of the vibration aviation tool. He printed out a model of an F-16 aircraft and started to cut pieces from a sheet of .040-inch-thick aluminum.

As the training tool utilizes a motor and electrical component, Harry P. sought help through a classmate, Luther F. Luther had already trained through the Term 2 avionics portion of the Aviation Maintenance Professional (AMP) program, so he was willing to take on the task!

First, Luther cut and stripped wires before adding connectors to the motor. The motor actually came from the older wooden training tool Nelson Reithmaier had created! Then, Luther environmentally spliced and heat-shrunk the connectors to the motor before hooking them to a switch. That way, the tool could be preserved without the threat of corrosion. 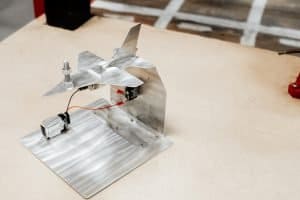 Once the electrical components were complete, Harry began to rivet the pieces of aluminum he cut together. Above all, he created a long-lasting aviation training tool that can be shared with students in the future!

The project is now back in Nelson Reithmaier’s hands, where he can use the training tool with his classes to show an accelerated look at how vibration affects parts in an aircraft.

Overall, Harry P. took about a full day of work to complete the project, spread over a week when class was not in session! The legacy of this training tool cannot be understated. Thanks to the work of students like Harry P. and Luther F., this extracurricular project will be a useful training tool for students in the future!

Are you a go-getter and interested in training with hands-on material? Fill out the form below, and take the steps towards becoming an aviation maintenance technician today!