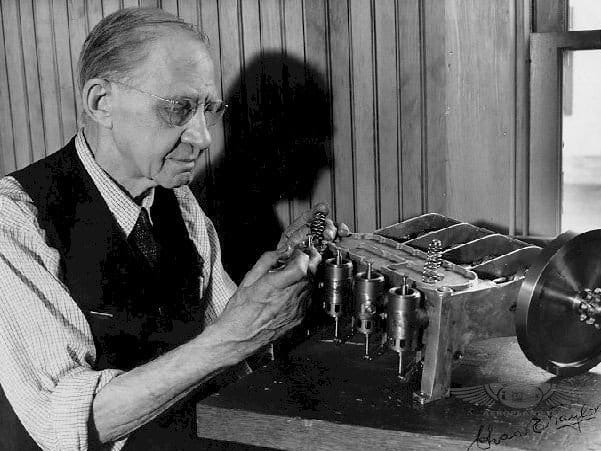 As aviation mechanics, we celebrate Aviation Maintenance Technician (AMT) Day every May 24th. It’s a day to honor those who keep our skies safe in the aviation industry by inspecting, maintaining, repairing, and overhauling aircraft. AMT Day also recognizes the achievements of Charles E. Taylor, also known as the “Father of Aircraft Maintenance.”

To understand the importance of Charles Edward Taylor, and AMT day, let’s take a look at what spawned such a tremendous celebration of those in the aviation industry who often go unnoticed.

It would have been a typical day in Kitty Hawk, North Carolina, if not for Charles E. Taylor and the Wright brothers. On this day in history, the Wright brothers – Orville and Wilbur – sustained flight in a heavier-than-air powered aircraft.

The Flyer was the first heavier-than-air machine to achieve controlled flight with a pilot aboard, being flown four times on December 17th, 1903. This date in history is most recognized for the famous flight, but takeoff would have never been possible if not for Charles E. Taylor

Born on May 24th, 1868, in a log cabin in Cerro Gordo, Charles E. Taylor was known for being mechanically gifted at a young age. After dropping out of high school at 12, he began working for the Nebraska State Journal as an errand boy. Before his marriage to Henrietta Webbert in 1894, he started his own business, making metal house numbers.

After he and his wife moved to Dayton, Ohio, in 1896, where the Wright brothers owned a bicycle shop, Charles E. Taylor became friendly with the pair. The Wrights knew of Taylor’s mechanical ability, and sometimes even asked Taylor to make parts for their bicycles. Eventually, the brothers offered Taylor a job at the Wright Cycle Company, which he accepted.

Orville and Wilbur were very interested in aeronautics and flying experiments, and while trying to perfect one of their gliders’ performance, asked Charles E. Taylor to help them build a wind tunnel.

After the first project, the Wrights declared they were no longer interested in gliders and were curious about a powered aircraft instead. In 1902, they had developed specifications for a biplane that would eventually be built but did not know how to make a functioning engine for it. So, they again turned to Charles E. Taylor for the mechanical side of things.

As the Wright brothers worked on building the airframe, Taylor was tasked with creating an engine. Having nothing but simple hand tools, he constructed a 180-pound, 12-horsepower engine. In just six weeks’ time, the first airplane engine was completed. The so-called “Father of Aircraft Maintenance” was essential to the success of the Wright brother’s flight on December 17th, 1903. Without the engine, it would have never occurred. Yet, thanks to a gifted mechanic, aviation was never the same.

Honoring the birthdate of Charles E. Taylor, May 24th, a United States House of Representatives resolution was introduced to establish National Aviation Maintenance Technician Day in 2007. On April 30th, 2008, the resolution passed, and National AMT Day was officially in place to bring awareness to the contributions of aviation maintenance technicians everywhere!

Aviation mechanics often don’t have the same visibility as pilots, but if these mechanics were not around, aircraft wouldn’t be able to fly. Millions of passengers enjoy the freedom of travel through the skies due to aviation maintenance technicians. We are proud to be a small part of this celebration!

If you’d like to learn how you can play a part in keeps the skies safe through an honorable and limitless profession, please fill out the form below!