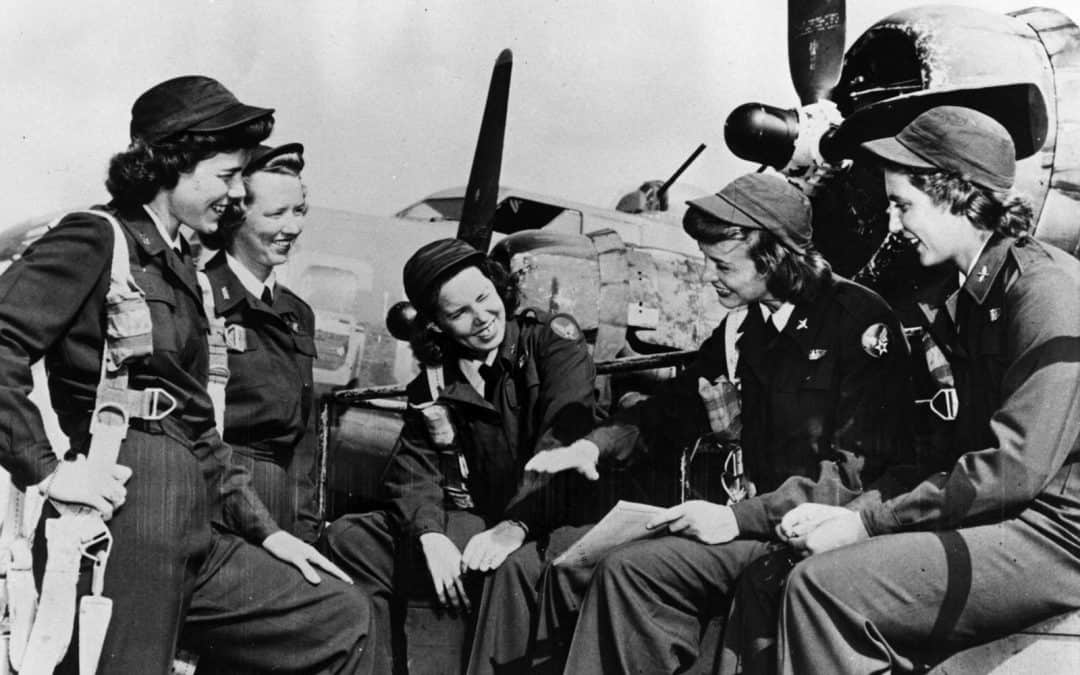 Women’s History has been an essential part of the History of Aviation since as far back as the 1700s. In the 116 years since the dawn of flight, women have always had a role. Elisabeth Thible was the first known woman to fly, up above Lyon, France, in an untethered hot air balloon in 1784.

The passion for aviation knows no gender, yet encouraging women to be more visible in the industry is necessary even today. According to a study by Rebecca K. Lutte of the University of Nebraska at Omaha, women make up less than 10% of pilots, maintenance technicians, and airline executives.

To celebrate Women’s History Month, we gathered information about three incredible female aviation pioneers: Aida de Acosta, Phoebe Omlie, and Dr. Peggy Dr. Peggy Chabrian. The opportunity for all to learn, grow, and forge astonishing aviation careers exists thanks to these women, among others. From Bessie Coleman, to Harriet Quimby, to Julie Wang in modern times, there is an abundance of women who pioneered in aviation. Their legacy will endure, inspiring generations to come.

Aida de Acosta was the first woman to fly a powered aircraft solo. Born in Long Branch, New Jersey, in 1884, she grew up as a socialite among her seven siblings.

The Man and the Dirigible

On June 27, 1903, she met Alberto Santos-Dumont, a Brazilian pioneer aviator, when she was nineteen. Santos-Dumont showed her how to operate his famous personal dirigible, named “No. 9 Runabout.” He would often travel above Paris in his balloon, visiting friends and his favorite cafes.

Santos-Dumont, in his book My Airships, recounts meeting Aida de Acosta and her desire to fly his dirigible. He gave her only three lessons before she took off on her own, showing her the basics of controlling “No. 9.”

Then, on June 28, 1903, Aida de Acosta climbed into the wicker basket of the balloon, and yelled: “let go all!” She flew the aircraft solo from Paris to Chateau de Bagatelle as Santos-Dumont rode below in a bicycle, shouting advice to her. She landed on a polo field, interrupting a game between the United States and England. 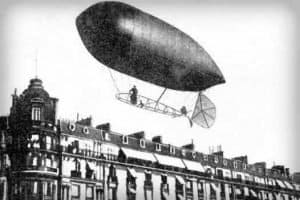 Acosta became the first woman to pilot any motorized aircraft! She accomplished this task five months before the Wright brothers took their famous first flight in December of the same year!

After the flight, the news was extremely negative and caused considerable outrage. Acosta’s parents claimed that no man would marry a woman who had done such a thing and wanted to keep her name out of the news. They believed an old Victorian-era adage that a respectable woman only appeared in the newspaper when she was born, married, and died. Aida de Acosta never flew again.

Aida de Acosta became a part of Women’s History even without knowing it. She kept the flight a secret until 1930. Even Alberto Santos-Dumont kept her identity a secret, not wanting to damage her reputation further. Helen S. Waterhouse, aviation editor for the Akron Beacon Journal, wrote a full account of the story in Sportsman Pilot in July 1933, finally giving her the credit she deserved.

Born in 1902 in Des Moines, Iowa, Pheobe Omlie was a prominent female aviation pioneer, even from a young age. One day before she graduated high school, she witnessed her an air show, becoming passionate about aviation at first sight. 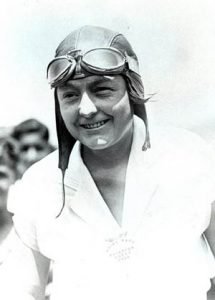 After, she would frequently hang around the local airfield, operated by the Curtiss Northwest Flying Company. Omlie would regularly pester the airfield manager about taking her on a flight. One pilot agreed, and at the direction of the airfield manager, attempted to scare her out of aviation altogether. The trip covered a few nose dives and even some rolls and loops. Instead of making her sick as the pilot and manager wanted, Phoebe Omlie became more enamored with aviation.

After her fourth flight, she bought her aircraft, costing $3,500 that her late grandfather left her, and became the owner of a Curtiss JN-4 ‘Jenny.’ She used her aircraft to perform stunts, such as wing walking and parachute jumping. She earned the record for the highest parachute jump performed by a woman by jumping from her plane at 15,200 feet! After, she landed a movie deal in 1914, where she performed aerobatic stunts in the film The Perils of Pauline. 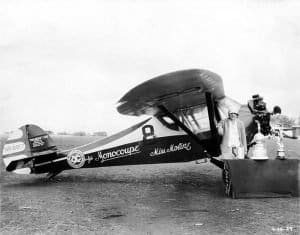 Phoebe Omlie posing with trophies after a 1929 derby.

Throughout the 1920s, Phoebe Omile participated in various air shows and continued to perform stunts. However, she gave up wing walking in 1927 while settling down with her husband, Vernon Omile, but remained an avid pilot. In the same year, she became the first woman to receive a transport pilot license and the first woman to earn an airplane mechanic license.

She is famously reported to have said: “If I take a mechanic, they’ll say that he flew the ship over the bad spots! No! I’ll be my own mechanic, and I’ll fly my plane myself!” If that doesn’t exemplify the stubbornness and determination of an aircraft mechanic, we don’t know what does!

Pheobe Omile broke several records during her life. For example, just a year after becoming the first woman in aviation to earn an aircraft mechanic license, she set a world record for women after she reached an altitude of 25,400 feet in her company’s Monocupe 90. Another accomplishment of hers was establishing 66 flight schools in 46 states, including a school in Tuskegee, Alabama, that would later train the Tuskegee Airmen.

Though she is famously known for her death-defying stunts and piloting, her persistence in wanting to learn and maintain her aircraft is something to be revered. Thanks to her, women have become increasingly interested in aviation maintenance!

In a time of necessary inclusiveness, Dr. Peggy Chabrian has been a beacon for women eager to flesh out their passion for aviation throughout multiple different aviation sectors. She embodies the strength of Women’s History Month and the lasting impressions that it will have on female aviations to come.

Dr. Chabrian first piloted a 1946 Ercoupe while in college, and was in love ever since. In the 30 years of her career, she has logged 2,200 hours as a commercial/instrument multi-engine pilot. Additionally, she recently added helicopter and seaplane ratings to her long list of flight qualifications! 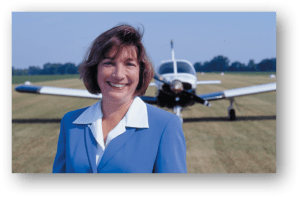 Her love of aviation expanded into education as a flight instructor. She has even been a part of many institutions, holding major positions in highly prestigious colleges and universities. Dr. Chabrian was the second woman to hold the position of dean of an engineering school in the United States!

What started as a conference to celebrate and connect women in the aviation field in 1990 in Prescott, Arizona, grew into something bigger. With 150 participants attending, the success of the conference led her to create a nonprofit organization to encourage women to pursue aviation careers. Dr. Chabrian founded Women in Aviation International (WAI) in 1994.

From the humble beginnings of 150 participants, the organization has marked an all-time milestone record of 14,000 members. And it’s not just for pilots! Members come from every sector of aviation, including astronauts, maintenance technicians, flight attendants, air traffic controllers, and more.

Educating others about the passion of aviation has been her lifelong career, and in 2019, she announced that she would be stepping down as President and CEO of Women in Aviation International, effective in April 2020.

The organization that she created has been influential in helping to encourage women, and men, enter the field of aviation. The impact that nonprofits and events such as Women in Aviation International should not be overlooked. Though Dr. Peggy Chabrian has decided to step down from her position, her legacy endures, providing a hopeful touchstone to those who love aviation and want to reach for a career in the sky.

Women in Aviation Continue to Inspire

The industry needs quality technicians and pilots, regardless of gender. In the maintenance sector alone, Boeing’s 2019 Boeing Pilot & Technician Outlook forecasts that 769,000 new technicians will be needed globally over the next 20 years to maintain the world’s fleet. Women are essential to help meet the increasing demand. Little by little, thanks to the efforts of women like Aida de Acosta, Phoebe Omlie, and Dr. Peggy Chabrian, as well as equality-seeking employers, and other passionate aviators, the industry continues to evolve.

As we reflect on Women’s History in Aviation, it is vital to recognize the barriers they’ve broken. Aviation would be a different industry entirely had they not.