How To Build A Career In Aviation Maintenance 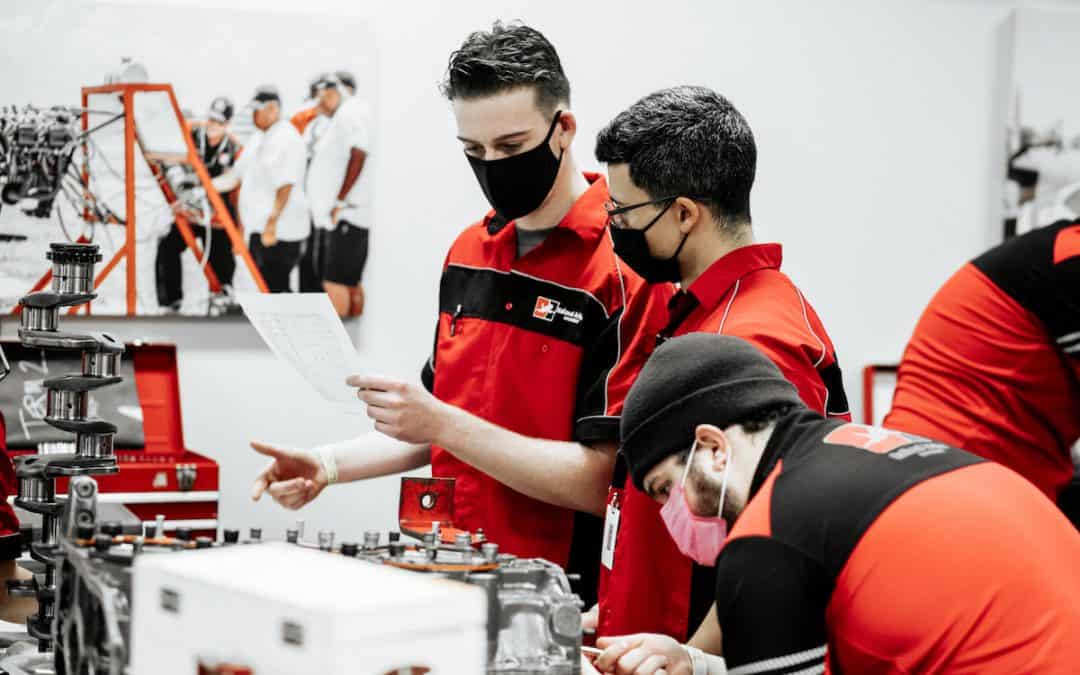 Career paths are fascinating journeys that are as unique as the individual pursuing them. Careers are formed over a lifetime, whether it be a carefully planned life-long intention, a combination of unexpected opportunities, a newly discovered passion, or a need for rewarding in-demand work.

Members of our National Aviation Academy (NAA) community have many reasons for choosing a career in aviation maintenance. Whether you’re on the brink of making a decision to join our training program or nearing graduation and the start of new beginnings, we want you to see how rewarding your choice can be. Curious to see how others have found their way? See the recorded interviews below and know there is no one right way to do it!

A Passion for Aviation

Elee Pierce, a 2014 alumnus of NAA-New England, always loved aviation. This led him to earn his Airframe and Powerplant licenses and quickly enter the workforce with Cape Air. After spending about six years at Cape Air, Elee had the opportunity to work for Boeing at Kennedy Space Center in Florida, where he was a part of the large team building the CST-100 Starliner! Eventually, he found another calling at NAA – this time as an instructor. With industry experience under his belt and a fresh perspective in mind, we are thankful for Elee and his enthusiasm for instructing future aviation maintenance professionals!

Casey Dick graduated in October of 2020 but began her journey into the aviation industry when she was much younger. With her father as an aircraft mechanic, Casey had a passion for aviation and machines. She knew what she wanted out of life, but sometimes, other things become more important. After initially trying out a traditional four-year college, Casey’s interest in aviation never faded. Like her father, she decided to earn her Airframe and Powerplant (A&P)! Along with other alumni from the same graduating class, she has started her career at Duncan Aviation in Lincoln, Nebraska.

Like many NAA alumni, David Plouffe was inspired to pursue aviation in the military. After giving community college a try and working odd jobs, David realized that he wanted to get back into aviation. After graduating from NAA in 2017, he found JBI Helicopter Services in Pembroke, New Hampshire – where he climbed the ranks to Chief Mechanic!

Adimil Martinez’s passion for aviation has taken him around the world! From his beginnings in Puerto Rico, Adimil decided to move to the United States to pursue his aviation dreams. Martinez became fluent in English, completed his training at NAA in 2011, and graduated with his A&P licenses. He spent time working with FedEx, Boeing, Sikorsky, and Augusta Aviation before landing his biggest opportunity yet – working as an avionics engineer on VIP helicopters in the United Arab Emirates (UAE).

Boe Browning didn’t have direction as a senior in high school. This all changed when he found his place in United States Marine Corps, working as an airframe mechanic. His aviation journey led him to recruit new mechanics in aviation maintenance schools. When looking for new opportunities, Boe saw that NAA was looking for a new instructor. Over time, Boe worked his way to becoming the Director of Education and Senior Vice President at the Clearwater campus!

Daniel Banister gives his students the advice he learned long ago: put aside your pride and ask for help. Bannister is an instructor at NAA in Tampa Bay. Before that, he served in the United States Marine Corps as an aviation electrician. Daniel would have never guessed he would be teaching Aviation Maintenance Technicians years later! The passion Daniel has for students to succeed is evident. He continues to be a beacon of positivity to his students and others around him.

Michael Balducci was sure of one thing growing up: a hands-on career was right for him. While figuring out which path to take after high school, Michael discovered aviation maintenance through NAA! From then on, he was all-in on becoming an aircraft maintenance technician. After graduating, Michael accepted an opportunity with Cape Air close to his hometown and has worked there ever since!

A Need for Rewarding In-Demand Work

Logan Johnson did not know which direction he wanted to take his life. He tried going to a traditional college but wanted something more hands-on. Logan found work washing aircraft for minimum wage while in school, and one of the airplane owners encouraged him to train at an aviation maintenance technician school to learn how to work on aircraft. Once Logan took that leap into aviation, he never looked back. After spending some time working in General Aviation, then at Tampa International Airport for Textron Aviation, he found his way to NAA, where he is now a Powerplant instructor.  It can be hard to know what career path to go into when you are just beginning to explore your options. But with instructors like Johnson, it’s easy to see what makes aviation such a worthwhile community.

Like many, JP Sheppard spent his early working years figuring out what he didn’t want to be doing. He knew he was ready for a career change when a family member referred him to the aviation industry, where he continued to thrive! Sure, the training wasn’t always easy, but Sheppard saw the light at the end of the tunnel. When graduation came around, he had multiple offers on his plate, and the difficulty shifted to deciding which opportunity to take! Ultimately, JP decided that he wanted to stay local to the Tampa Bay area. With a newborn and surrounding family, JP chose to become a part of the Airborne team!

Growing up in Mississippi, Terrence Woodard had a knack for machinery and anything hands-on. At 17 years old, he made his way to NAA in Tampa Bay. Now, he has worked in the industry for several years and is a Maintenance Supervisor with United Airlines out in Houston, Texas. Founded in 1936, United Airlines is the third largest airline in the world! Terrence often visits NAA campuses to share his experience as an NAA alumnus and recruit new maintenance talent.

From high school to a Veteran of the U.S. Navy, Nate Bozeman decided he did not want to endure four years of college. Instead, he chose to stay in aviation. Upon graduating from NAA, Nate was hired by Continental Air. From commercial airlines, Nate would come back to where his aviation mechanic journey began and is now one of our most beloved instructors at the Tampa Bay campus!

Are You Considering A Hands-on Career in Aviation?

Whether you have a passion for aviation, enjoy hands-on work, are seeking a career change, or know someone who has been successful in aviation maintenance, we urge you to learn more about this opportunity!

Request more information below to start exploring who we are and the opportunities the industry has to offer. Or apply now to start a new career today!