Three different Air Force Global Strike Command (AFGSC) bombers will come together for a trifecta flyover during the National Anthem performance at Super Bowl LV. In a rare formation, the three aircraft will leave from their respective bases to meet up to fly over Raymond James Stadium in Tampa, Florida on February 7th.

The bomber aircraft flyover will feature:

– B-2 Spirit from Whiteman AFB, Missouri 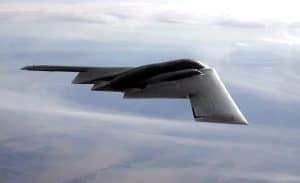 These types of aircraft typically do not fly in formation together. However, it seems appropriate for this occasion!

With the final notes of “The Star-Spangled Banner” ringing around the stadium, all eyes will be on the sky as the three bombers aim to pass at just the right moment.

Captain Sarah Kociuba, leading the flyover, mentioned that planning has been very precise for this event and that she and the rest of the team have been working for weeks to ensure it comes together.

The entire flight will take about a seven- or eight-hour round trip because the Air Force is including training in the sortie.

Conducting a flyover is more than just a few interesting moments. In fact, this flyover is utilized by the Air Force as a demonstration to showcase the flexibility of AFGSC’s bombers and their ability to deploy anywhere in the world from the continental United States.

Additionally, the U.S. Air Force performs about 1,000 flyovers per year, which serves as time-over-target training for pilots, aircrew, and ground control teams. To the AFGSC, the Super Bowl 55 flyover has more to do with honoring service members in our military and inspiring future generations of aviation enthusiasts than anything else!

Be sure to catch the flyover as it happens before the big game on February 7, 2021!